Below is a summary of the Catenian association and how Garstang Catenian Circle is an important member of that Association.

WHAT IS THE CATENIAN ASSOCIATION?

A small number of Catholic bishops approved the young organization. They were anxious to see Catholic communities break the bond of restricted education, low social status, and limited political power and influence.  Foremost among these was Louis Charles Casartelli of Salford who acknowledged that the Chums, and later the Catenians, were a force for good and a vehicle for action.

The basic unit of the Association is the Circle and members are known as Brothers. In 1910, there were five Circles with 250 Brothers; by 1914, there were 27 Circles .with 1,593 Brothers. Since that formative period, the Association has continued to expand. Now there are over 10,000 Brothers in Circles in the United Kingdom, Australia, Africa, Ireland, Malta and Goa. Circles are grouped together into Provinces, Area Councils and Liaisons Councils.

The Catenian Association is an international body of proudly Catholic laymen who meet at least once a month in local units called Circles, to enjoy each other’s company and thereby strengthen their family life through friendship. It is open to practising Catholic laymen from the age of 21 years. It is anticipated that this figure will be reduced to 18 years in the near future.

The Association has a number of objectives:

To foster deep benevolence of a spiritual, moral and financial nature to members and their families who find themselves in difficulty or need.

To provide support to the Clergy.

To advance the interests of young Catholics and assist them in the choice or pursuit of a career.

The Catenian Association is non political and is not a Catholic Action organization, but it is an organization for active Catholics. Many members of the Association are involved with the Church, particularly as Readers and Eucharistic Ministers. Some are governors of Catholic schools, or involved with Diocesan education committees, and others undertake roles in Parish and Diocesan finance committees or other activity. Many Catenians are involved with Catholic charities, and other similar local, national and international charities. Members are drawn from a wide range of experience. Many have business or professional background, some are self employed, while others have teaching, health service or other public service background. Some have no formal qualifications.

The Catenians raise funds to support a wide span of charities and interests, at local, National or International level. The Association has two charities: “ The Benevolent and Children’s Fund” for its own members and their dependents, and the “Bursary Fund” which helps young Catholics aged 16 to 24 who are to take part in community-based projects at grants from the Bursary Fund do not need to have any connection to a member of the Catenian Association. In addition, Presidents of Circles and Provinces usually raise funds for a nominated charity during their term of office. Occasionally there is an additional charity nominated by the Association. In its Centenary year in 2008, the Association raised over £250,000 for “Water for Life”.

ADMINISTRATION OF THE CATENIAN ASSOCIATION

STRUCTURE OF THE CATENIAN ASOCIATION

Garstang Circle was inaugurated on the 29th April, 1965, and the Circle is due to celebrate its Golden Jubilee in 2015. Five of the founder members are still in the Circle. Initially meetings were held at the Royal Oak Hotel, Garstang, and in subsequent years meetings were held at the Chequered Flag, Garstang, and The Bowers Hotel, Nateby, finally relocating to the Garstang Country Hotel, Bowgreave.  Meetings are held at The Garstang Country Hotel on the third Thursday of every month at 7.30pm.  Meetings are not just restricted to members of Garstang Circle, any member of the Association is entitled to attend and in this respect Garstang is regularly well supported by visitors from across Province 10 and, sometimes,  beyond the Province. Refreshments are available after the meetings for anyone wishing to partake. Activities after the meetings vary from social gatherings to interesting speakers, to which ladies are frequently invited, as they are to other social events aside from meetings.

The Catenian Association is not specifically a fund raising organization, but Circles do frequently support charitable causes, not just locally but nationally and internationally, which Garstang Circle has always done. In fact, recent examples are: in 2011 the President’s Charity raised £1,000 at functions for Brian House Children’s Hospice, Blackpool, which cares for terminally ill children. At the presentation a representative of the hospice touched the emotions of many in the audience when she described the work they do in endeavouring to fulfil the last wishes of terminally ill children. Similarly £2,000 was raised during 2012-13 at its functions for the Christian Brothers School in Bulawayo where, due to austere conditions imposed by the State, all education has to be paid for, and Garstang Circle’s donation was made to the school to help to support young adults at evening classes run by the Christian Brothers, thereby helping them to improve their education and, hopefully, obtain better employment as a consequence. 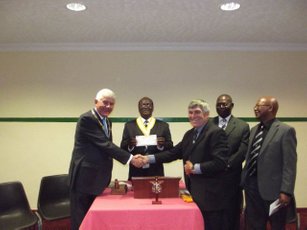 There are four Catenian Circles in Zimbabwe and Garstang Circle’s donation was presented by the Grand President of the Catenian Association, on behalf of Garstang Circle, to the Chairman of the Governors of the Christian Brothers School Peter Edmeades, who is also a member of Bulawayo Catenians, when the Grand President visited Zimbabwe as part of his African tour towards the end of 2013. The photograph shows the presentation.