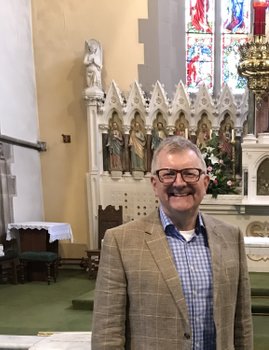 CONGRATULATIONS Fr Geoffrey  on the 40th Anniversary of your Ordination to the Priesthood, on 24th April 2022. Our parishes of Garstang and Scorton were pleased to join in the celebrations with you and your family.

I was born and spent my early years on Walney Island, where my mother and my family still live. As a young child, I was a keen server in those complicated days when the Mass was moving from Latin into English. I loved it. Even then, I was drawn to the drama and the theatre of the liturgy, and this has shaped my life and my ministry.

I studied for the priesthood at our diocesan junior seminary, Underley Hall near Kirkby Lonsdale and at Upholland College near Wigan. After my A levels, I spent seven years at Ushaw College near Durham. While there, I also studied for a degree in Philosophy at Durham University. I graduated and was ordained deacon in 1980, and ordained priest in St Columba’s church, Walney Island in 1982.

After a couple of years as an assistant priest in Kendal, I went to do further studies in Paris, at the Institut catholique, part of the Sorbonne. I was awarded my Masters degree in Liturgy and Sacramental Theology in 1986, and returned to Ushaw College as Professor of Liturgy. Over the next ten years at Ushaw, I also taught in the Anglican theological college and, occasionally, in the University’s Department of Theology.

I have served on our National Liturgical Commission, and on several of its sub-committees and working parties; for ten years I was the RC Observer on the Church of England’s Liturgical Commission; and for fifteen years I served on the International Committee for English in the Liturgy, which translated and prepared the liturgical books for the many countries where English is the language used in the liturgy. I am currently a member of the North West Historic Churches’ Committee:

After my time in Durham, I served as a priest in two parishes in Preston before moving to Carlisle, where I was parish priest of St Augustine of Hippo for eighteen years.

I am delighted to be living now in Garstang, and to have care of the two lovely parishes of St Mary & St Michael, Garstang, and St Mary & St James, Scorton. I hope to build on the wonderful and strong traditions of both parishes and, with parishioners, to discern how God is calling us to live our Catholic faith today.

What does my priesthood mean to me? The statement with which I most identify came from Fr Francis John Patrick Mulcahy, Chaplain, 4077 M*A*S*H. In one episode, writing a Christmas letter to his sister, he described his ministry as, “Hanging around on the edge of effectiveness.” Perfect.

Deacon D'Arcy was born in Manchester during the 1940's. Educated at St Francis Xavier School in Liverpool, he went on to become an apprentice at Boots the Chemist in Hanley before qualifying as a pharmacist at Aston University. He worked for CALMIC at Crewe making lots of Calpol (among other things) and moved on to be a Boots Branch Manager until retirement.

D'Arcy moved to Garstang with his wife Catherine in 1970 and was ordained Deacon in 2002. He has four children, all married. 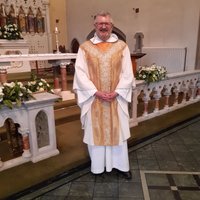